A few days have gone by since the last time I did this blog and many of the promises that I have made to myself: less digital, more me time, enjoy the moments etc. have completely gone out the window as I have been flat out just trying to catch up on what I missed whilst I was stranded on the island, however, nothing like a long plane ride to Hawaii for our Boost annual conference to give me the time to catch up.

You would have seen that we got Steve and Nova before they got us and we managed to do pretty well on the tribe swap. I remember during the swap being incredibly nervous as all the skills and negotiation can go out the window with one bad luck draw of the wrong buff.

I was relieved to see that Abbey, Pia, Simon, Rosco and I had all pulled out the pink buff and was also thrilled to see that we got ‘The Horse’ as I believed he was really the main reason the contenders were winning most of the immunity challenges. I also believed that I would work with Shaun long term, he is one of the nicest guys you can find and also a real game player, which to be honest, is what we are all there for.

To top it off I now had an idol that was active and could play it if needed. My decision to hold the idol for an ‘insurance policy’ paid off – you get lucky sometimes! 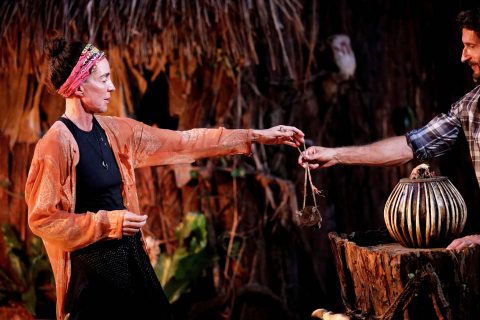 It was actually at the Café reward challenge that we started to feel differently about David. Abbey, Pia and I realised that David was playing hard and not necessarily on our side. In my opinion he committed three mortal alliance sins: 1. Put out the name of one of your alliance (Pia). 2. Named one of your alliances as the “power couple” (myself) and 3. Promised one of your alliance to go to the end with them (Abbey) – and then to think that women don’t talk… David really?

Now of course this is Survivor and lying is part of the game but so is trusting your alliance and if you do lie then you have to be pretty careful no one will find out. Once we found that David was playing us, he was target number one.

But Survivor is complex, we knew we could not trust David but we also knew we needed him as a number post merge so the best way to do this was to create a mutual enemy with Shaun, David was the target. We simply told Shaun that David gave him the fake idol and then watched him go for David.

Oh dear, men are so simple 😊 – now to all the men out there I am joking… ish.

We tried to achieve two things by turning them against each other: 1. Create a common enemy (the best way to bring people together) and 2. Try and get Shaun to trust us and potentially be a number after the merge.

Just a side note on David, when I first met him, I really liked him and he was one of my first alliance members then power went to his head and he was not so popular or in other words, he was a tool. But catching up with David after the show I love him! He is funny, witty and one of the nicest guys I have met… I know surprise, right?! He is also an incredibly talented cartoonist. I am also loving watching him on this game, he keeps me in stitches. 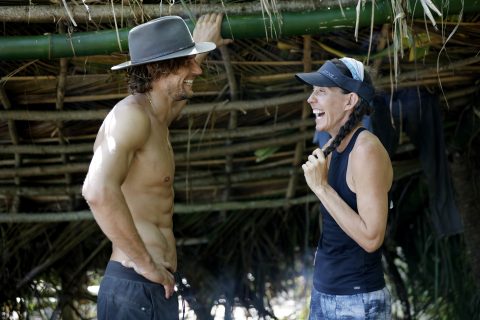 I digress – what we did not anticipate was the Survivor Gods threw us a curve ball and suddenly Shaun was a Champion not a Contender.
This was good and bad for us. Good that they did not take one of us (ex-Champions), that would have weakened our numbers, but bad as we were a weaker physical tribe and it also prevented us from continuing to develop our relationship with Shaun further.

Despite losing the very powerful Shaun we won the next challenge. Simon is a seriously talented sportsman; he was basically my coach and I listened to every word he said before each challenge. He was incredible on the throwing challenge off the tower of terror and of course we had the superman Rosco who can hold his breath “for as long as it takes” (this is his words) and we truly smashed the challenge. A night off from tribal council.

I knew David had an idol and I was sure Luke did but when we rocked up at another challenge David and Luke told us that they used their idols and they were seriously screwed. Our alliance had a long conversation about throwing the next challenge. We are all competitive but this is Survivor and you have to outwit, out last and out play and if we lost the boys then at merge the Contenders would have the majority and we would simply be picked off.

We went into tribe swap 11 Contenders to 7 Champions and the plan was to go to merge 7 Champions and 5 Contenders which meant that we could not lose any members so we really did have to do what we could to protect our numbers. Yes, David was not as trustworthy at that point as Luke but he was still someone that can get us further through the game.

Every single one of us came to the conclusion that we had to throw the next challenge as we had the numbers and the boys did not.

In my opinion you cannot think one tribal in advance you need to think 3 or 4 moves ahead and make decisions based on this.

With the boys protected for another day we went on to work out how to get rid of Harry.

With another immunity loss we had a shot at Harry. Casey was playing hard and going from Harry to us so she was hard to trust but she was also smart and she knew we had the numbers so I thought she would vote with us despite the fact that Harry told her he would play the idol for her. At the end of the day Harry got the majority of the votes but with him playing the idol Casey went home.

We had days to get to know Harry and Matt and they are both genuinely good guys.

At first, I was not sure of Matt as he was all huff and puff at the challenges but when you get to know him, he has strong character, he is a school teacher and someone that I thought I could work with. So, when we lost yet another challenge it was Harry that we wanted to go… again. 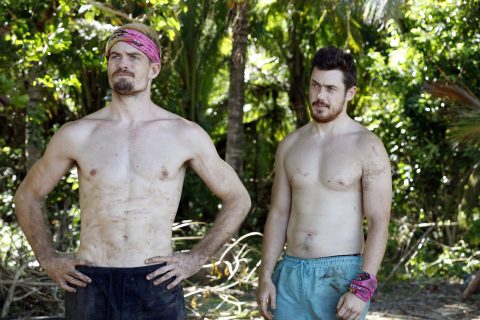 As you can imagine there was a lot of running around, particularly with Rosco following Harry around 24/7. I am sure neither of them slept a wink but we did not want Harry to find another idol. Ross had a goal in the game and that was to find an idol (he called them the Easter eggs).

We will have to see if he achieved this but right now, he had to shadow Harry to make sure he could not find one or once again he would slip through the gaps…

The next reward challenge was one of the most confronting challenges that I did on the island.

We rocked up to the challenge to see that we were once again at the tower of terror with a plank that went out over the water. I am not really scared of heights or anything really but the idea of being blindfolded on a plank did not really rock my boat.

Abbey does not like heights, ok that is an understatement, she hates heights and Pia is not a fan either so I went first out of the girls. They blindfold you and walked you out to a spot, you stand there for what seemed like hours while Johnathan was announcing the challenge.

Then as you would have seen we had to untie the rope and throw the ring in and then swim to the hook, the person who hooked it first won.
I did ok, I untied it and was in the water quickly but unfortunately Baden got the ring on the first shot and I lost (did I tell you that I hate losing) which meant the reward was lost.

The immunity challenge was next and again it was in the area that was full of mud.

The mud was seriously up to your calves and you could barely walk but when Johnathan says go, you do not think, you just do. Down the slide I swallowed a mouthful of muddy water then with a mallet in hand I got to take all my frustrations out on a plank of wood – I have to say it actually felt really good. 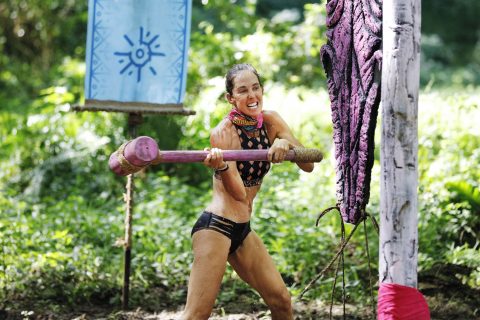 Considering we had more women than men in our team we actually got to the end quicker and we were up to the puzzle first.

It was no secret that Harry was next on the chopping block so we thought it was fair that he had a chance at the puzzle, which he said he was quite good at and he was highly motivated to win.

Unfortunately, despite the fact that Andy was trying to throw the challenge, Baden was just too good for us and we lost another immunity challenge and once again I got the pleasure of sitting on those really hard bits of wood at tribal council.

I have to admit, I was really starting to like Harry, he has the most amazing recipes in his head and a very cheeky smile but this is a game and it was Harry that we wanted gone as we trusted Matt just that little bit more.
Unfortunately, Harry Houdini pulled a rabbit out of the hat with another hidden immunity idol and Matt went home.

One thing I liked about the people in my tribe was that they knew it was a game so when we returned back into camp it was pats on the back to Harry and off we would go plotting his demise or him plotting mine.

However, after this time, maybe we actually needed to work together? If we could not eliminate him, then working with him might be the answer?

Survivor on TEN Sunday, Monday and Tuesday at 7.30pm.

To catch up on episodes check out: Survivor on Ten Play 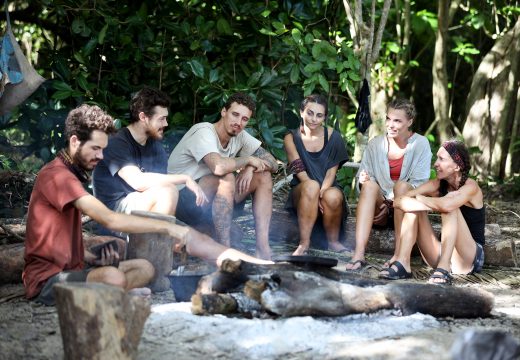 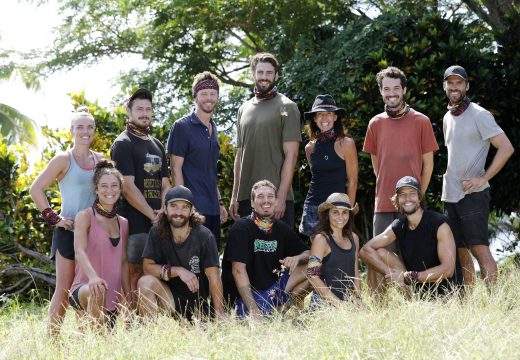 I made merge… HOORAY!

March 23, 2020
Previous Post Let me take you on my Survivor journey
Next Post I made merge... HOORAY!