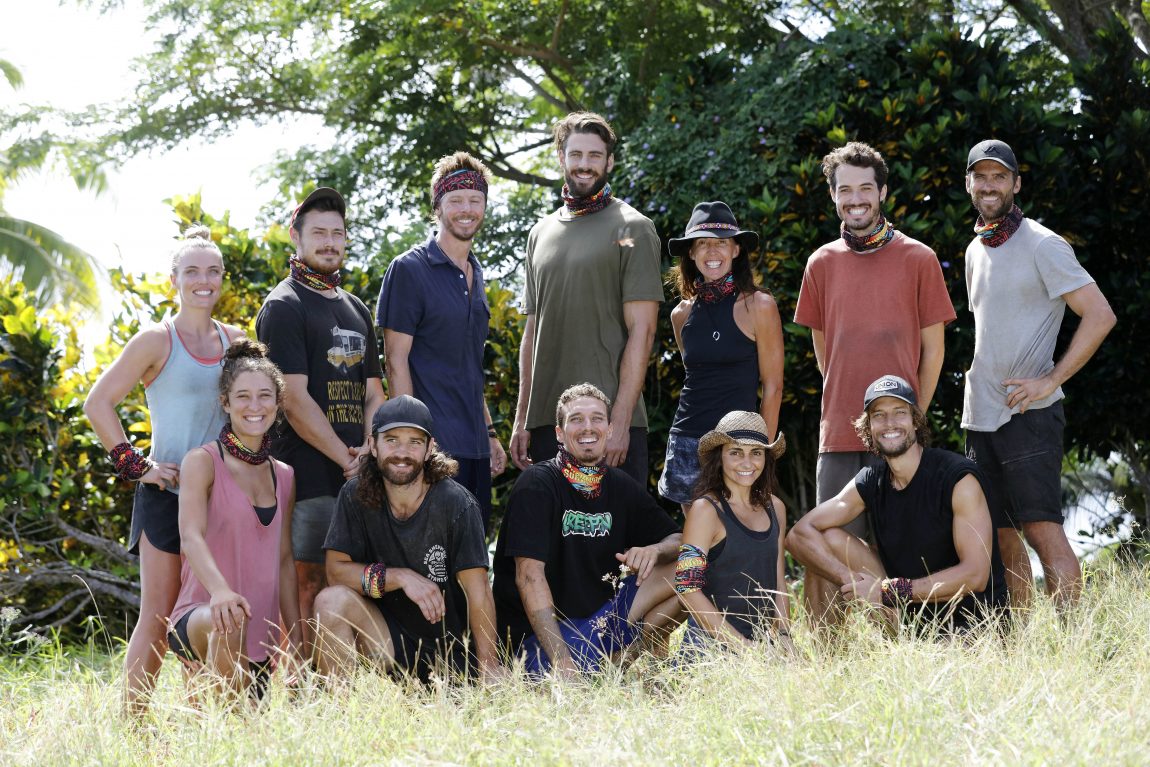 I made merge… HOORAY!

The day before merge….

At the contender’s camp we knew that we were very close to merge but being Survivor there is nothing predictable, so we were unsure if we had one or two more days.

I was unprotected as I had used my idol the night before.  I have to say it was very nice to have that little necklace in my bag, even if it was the skull of a dead animal!

We arrived at another immunity challenge and this one we had to jump across logs, sounds easy, well it would be other than they were standing upright and not lying down.

They stood out of the ground from half a meter to about 1.5 meters which was a long way to fall.  The distance was as such that you had to jump from log to log.   What was going through my head was the million ways I could hurt myself on this challenge. My fear was nothing compared to Pia’s, who being only 5’2”, was really nervous about how to get across without serious injury. 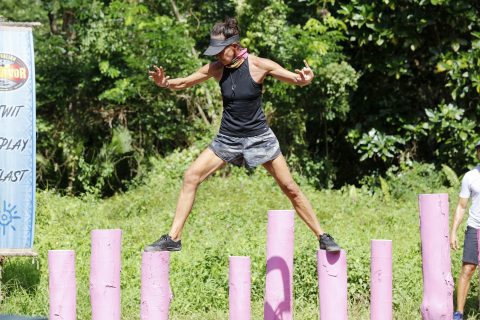 What you find with all these challenges is that it is just as much a mental game as a physical game.   Pia told herself that it was nearly impossible so it became nearly impossible. Pia fell probably 10 times until she sprang across the poles like that dancer that she was.

We had all made it across but we were miles behind.  The next part of the challenge was the easy part, a simple swing across a small gap but this is when it all went pear shaped. 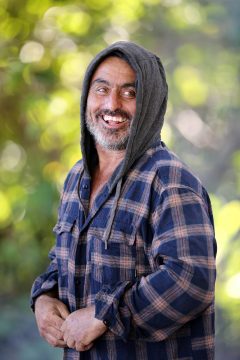 When it was Rosco’s turn he swung and the rope simply dropped, not sure if it broke or the rope untied, the result was the same, Rosco was in a ditch with some serious damage to his foot. This was devastating to me.  When you are having this experience, you know it is a game but this does not take away the feelings and relationships that you have with people.

When it was freezing at night Rosco would give you his jumper, he was the one that did the fire and never ever stopped working. He was the one that made us laugh and would not take anything seriously. He made the camp fun, so it was the first time in the whole experience that I actually shed a tear. Tears or frustration and anger but most of all that I was going to miss him. We did not know at the time if the injury was serious enough for Rosco to go home or not so we had to prepare for who to vote off.

Harry had proven that he could find idols and even though we thought the chances of him finding another idol was slim, if anyone could, it would be Harry. So even though logic said Harry should go home, as a team we needed to split the vote and we knew that whoever’s name was written down would not trust us post merge.

Rosco, Abbey, Pia and myself was my first alliance and we had to fight our way to get where we were. Simon was part of the original sporting alliance and even though I loved Simon and wanted him on my team there was no way I could put down the name of any of my original alliance members.

When Casey was there, she told us that Shaun was trying to get Simon to go over to his side and Simon told him that he would consider it post merge.

We also knew that if we put Simon’s name down as a split vote then he would know that he was on the bottom of the alliance and would definitely go over to Shaun at merge.

Harry and Shaun were enemies so we thought Harry could be a number for us at merge and would be less likely to move to Shaun’s team than Simon.

Pia and myself agreed and Abbey could see that we had no other choice.  We just had to talk to Rosco when he came back and we were not sure which way he would go.  Unfortunately (fortunately for Simon) Rosco did not return to the game. 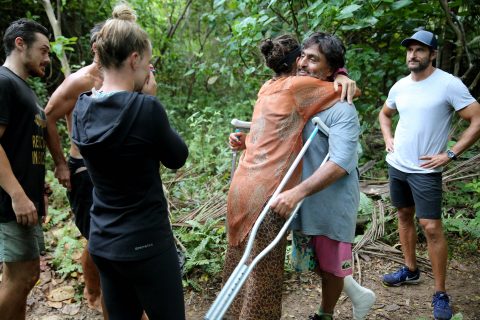 With the new morning also came a major milestone in the game, MERGE!

In Survivor there were a number of milestones that I wanted to achieve: 1. Not being the first voted out 2. Tribe swap. 3. Merge. The next milestone would be top three. After all the close calls and crazy challenges, I was thrilled we made merge especially considering Pia was nearly voted out day one and I was in the same position on day three.

We were all wrapped to make this step but I was not prepared for how crazy it got. I am a really logical person and my super power is making complicated things simple, so for me and my team getting to the top five was simple if we kept our heads and kept to the plan.

I always laugh when people say that the production company must give you handouts or something for comfort.  This is far from the truth and even to a point that they make it harder for you. (We knew what we signed up for) An example of this was the next reward challenge where you had to hold a bag over your head and drop the bag if you wanted a temptation item.  What you did not know is that they cut our rations so both tribes ran out of food 24 hours earlier and that is after everyone was already hungry, so having a food challenge we were all highly motivated to eat. Daisy proved to be incredibly strong on this challenge and her reward was a box with all the temptation items in it as well as an idol.

After the reward challenge I was so happy to be walking back in to my old camp, it felt like coming home. Our original tribe was very practical and we made a good shelter and camp. The other camp was not as good with shelter and it was ridiculously windy.

So here we were, 6 Champions and 6 Contenders, it was a great effort by all and we only lost Rosco from the Champions from an injury not being voted out.  To come from 11 Contenders and 7 Champions to 6 of each was a great start to merge.

Shaun, rightly so, was concerned about the 6 vs 6 and he was talking about sticking strong with his Contenders, even if it meant going to drawing rocks (this is what happens if you cannot decide on a vote).

Champions were not in a great shape, Shaun had just won the immunity challenge and we were convinced that Daisy had an idol from her reward, which put them in a strong position with options on how to tilt the scales to the Contenders side.

Luckily for the Champions everyone disliked Andy and we managed to convince them that getting rid of a Contender was a good idea and Luke promised Shaun that they would even out the numbers at a later date (you will have to watch to see if this happened).  The reality was that with Andy gone the Champions were, for the first time, in the majority.

When you make merge, everyone goes a little crazy and this was made clear on last night’s episode. People were hungry to make big moves even if it was to the detriment of their own game.

Abbey was incredible with the pole challenge; this was torture on your feet and I was wrapped that she won the car.  Pia and I were watching and Pia whispered to me that “we cannot beat her and we need to get her out.”  I had mixed emotions, first was that Abbey was a solid number for us but I agreed with Pia that she was a physical threat, but there were more threats before Abbey.

I loved playing with Pia as she did not get caught up in the emotions and she liked to play the game like I did, we were a great team.

The immunity challenge was up next and David did an amazing job beating Shaun so finally we had a free shot at taking Shaun out but the Survivor God’s threw in a twist; instead of going back to camp they set up three camp fires in which we could talk, this was ingenious on their part as it caused confusion, doubt and fear. The only one standing in the same spot was David with the immunity necklace around his neck. 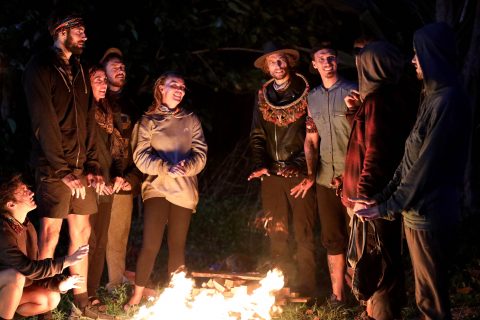 It was when we were at the end fire that Shaun threw out the idea of voting for Luke, Simon was keen for a scalp as was Pia, and I found myself agreeing to a vote of 6 people voting out Luke, you just did not have time to think things through and I hate making calls on the run, these are always bad calls.

Things moved very quickly and as soon as we said yes, we were all separated again and then there was not another time to talk to sort of this mess I had just made for myself.

The decision to vote out Luke was stupid. Firstly, Luke was more likely to vote with me than Shaun going forward and secondly, Abbey did not know the plan so she would flip to another alliance and would not trust us going forward meaning Simon, Pia and I would go from top four of the Champion alliance to the bottom three of the Contenders. The final reason was that we may not get another shot at Shaun and he was the challenge beast.

As I did not have time to talk to anyone since we went straight to tribal, I knew I had to convince Simon and Pia at tribal that voting for Luke over Shaun was a seriously bad idea.

Luckily they listened and Shaun became the first guy on the jury.

Note on Shaun: He is a great player and was a good mix of brain and muscle. When he was around, the Contenders listened to him, he could rally them and without him they were an easier target. I enjoyed playing with Shaun and as people say, he really is a super nice guy.

The craziness continues on Channel 10 Monday and Tuesday at 7.30pm.

To catch up on episodes check out: Survivor on Ten Play 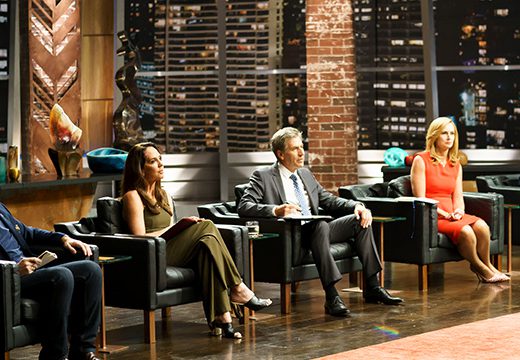 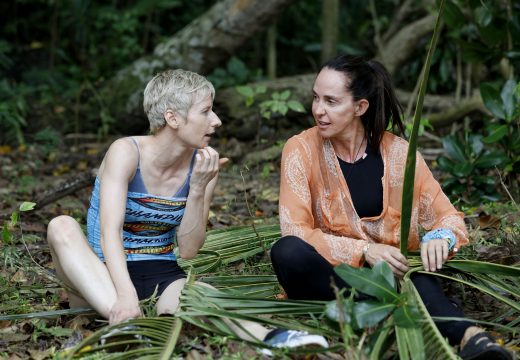 Why on Earth would Janine do Survivor? 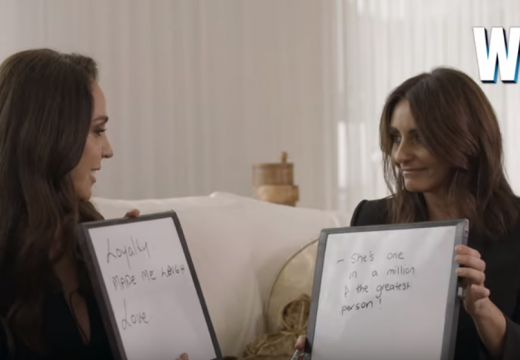 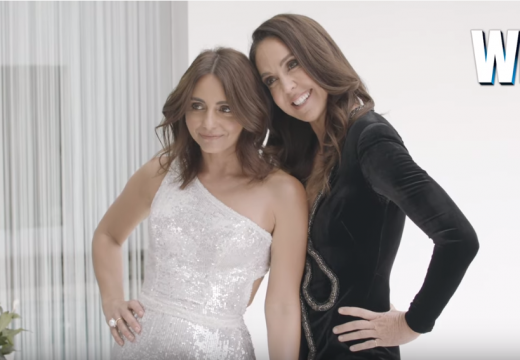